Hey now! I trust everyone has recovered from last fall’s unexpectedly sudden end to what we all thought was going to be the Red Sox’s epic 2016 postseason run? Of course you have. After all, we did get a couple of pretty sweet consolation prizes.

First, we had this:

And then, of course, we had this:

My throat still hurts from screaming at the end of that game.

So, with the Cubs winning the World Series for the first time in more than a century, and the Pats winning another Vince Lombardi Trophy via the greatest comeback in Super Bowl history, I think it’s safe to say that our collective baseball palate has been cleansed and we’re ready for the 2017 Red Sox, amiright?

Sadly, the folks here at SoxNation.net (read: me, my wife & two kids) need a new kitchen worse than people in Hades need ice water, so our semi-annual trip to Red Sox Spring Training Camp? Yeah, that’s not happening this year. (The crying you hear is me.) And so, since I can’t make it to Fenway South in 2017, I’ve decided to reminisce about years past … starting with our very first Spring Training experience in 2013. (Teaser: 2015 & 2016 are much better, but this is a good start.)

In February of 2013, my mother-in-law invited us to vacation with her on Sanibel Island, located just off the coast of Fort Myers. On the Sunday afternoon we arrived, the temperature had plunged well below the “Hey, we’re in Florida! This is awesome!” level, and our Monday-morning beach plans were scrapped due to record lows … which was fine with me, as I had been looking for an excuse to head back over the bridge for a firsthand look at JetBlue Park.

Having never before been to Red Sox Spring Training Camp, I had no idea what to expect. I mean, I figured there’d be some cool photo opportunities, and I was right about that: 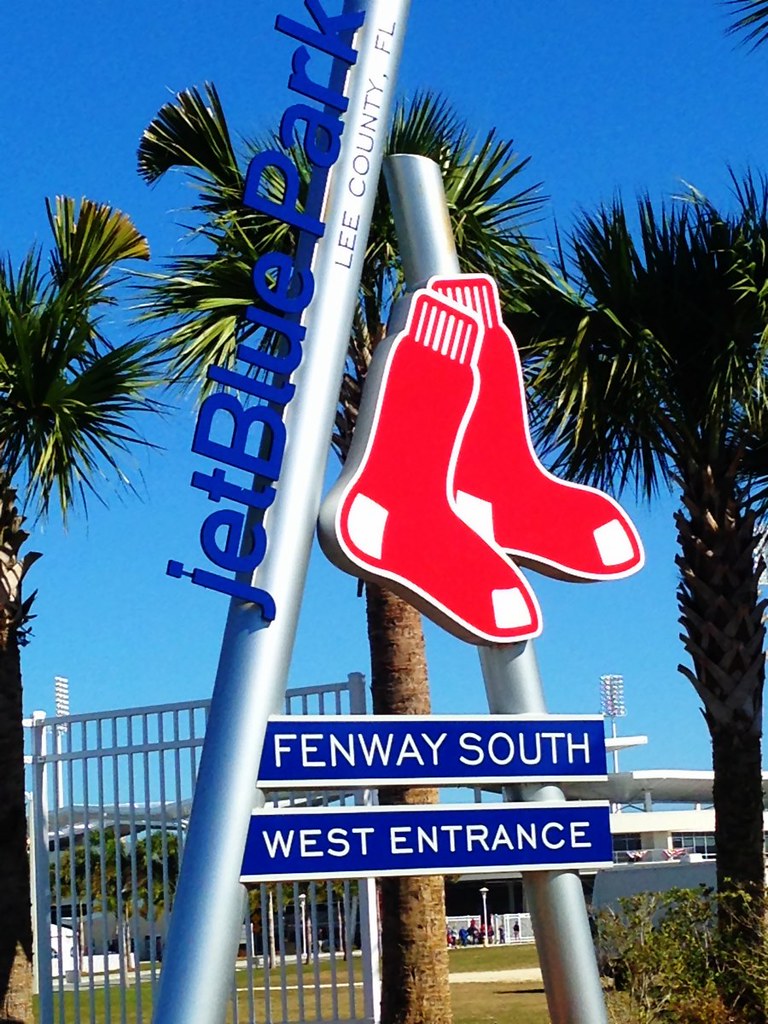 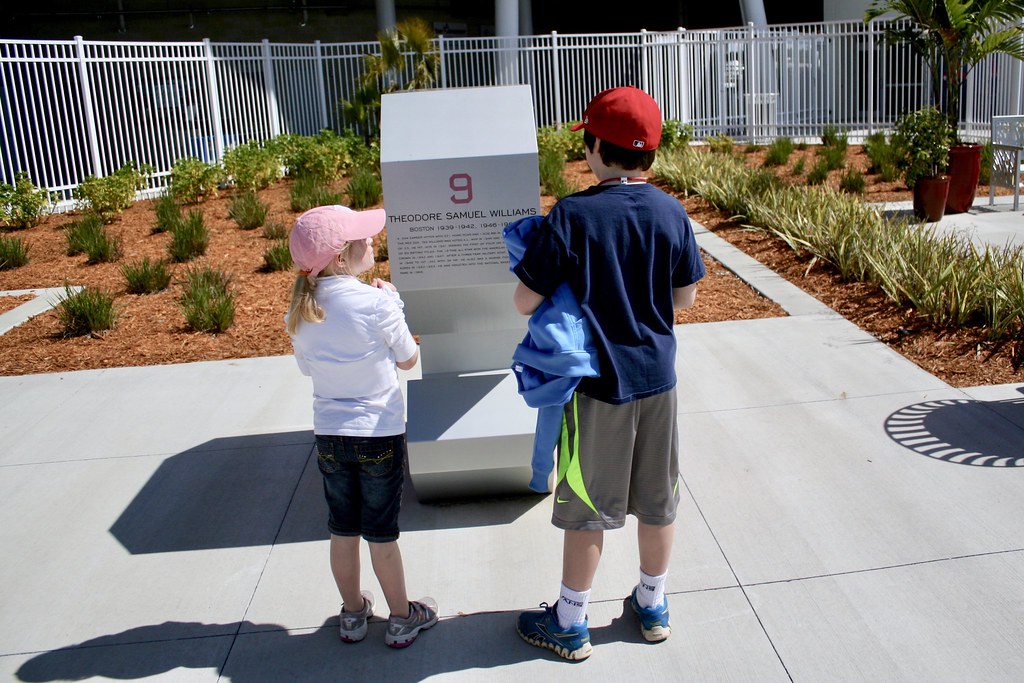 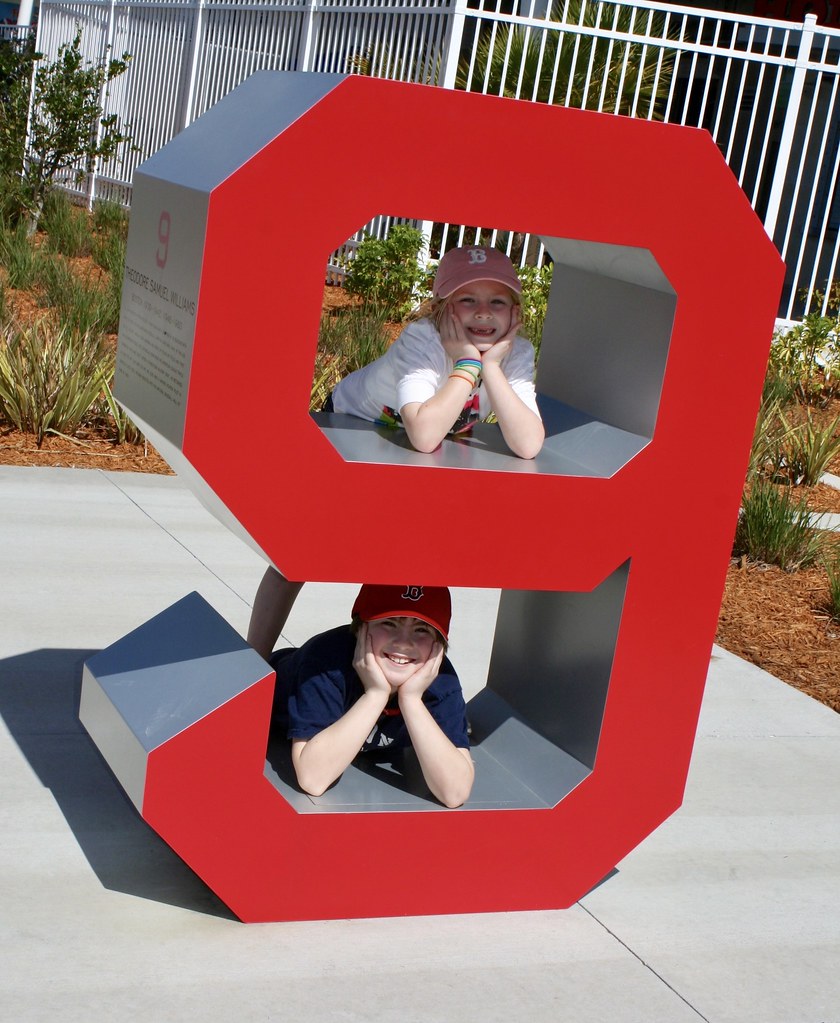 The big question, though, was: Would we actually have any up-close-and-personal encounters with Red Sox players? I wasn’t getting my hopes up … but that’s only because I never get my hopes up about anything. (It’s a neurosis that runs deep, but rarely am I disappointed.)

As it turns out, I had no need to worry, because, as I stood behind them snapping photos, my kiddos scored autographs from: 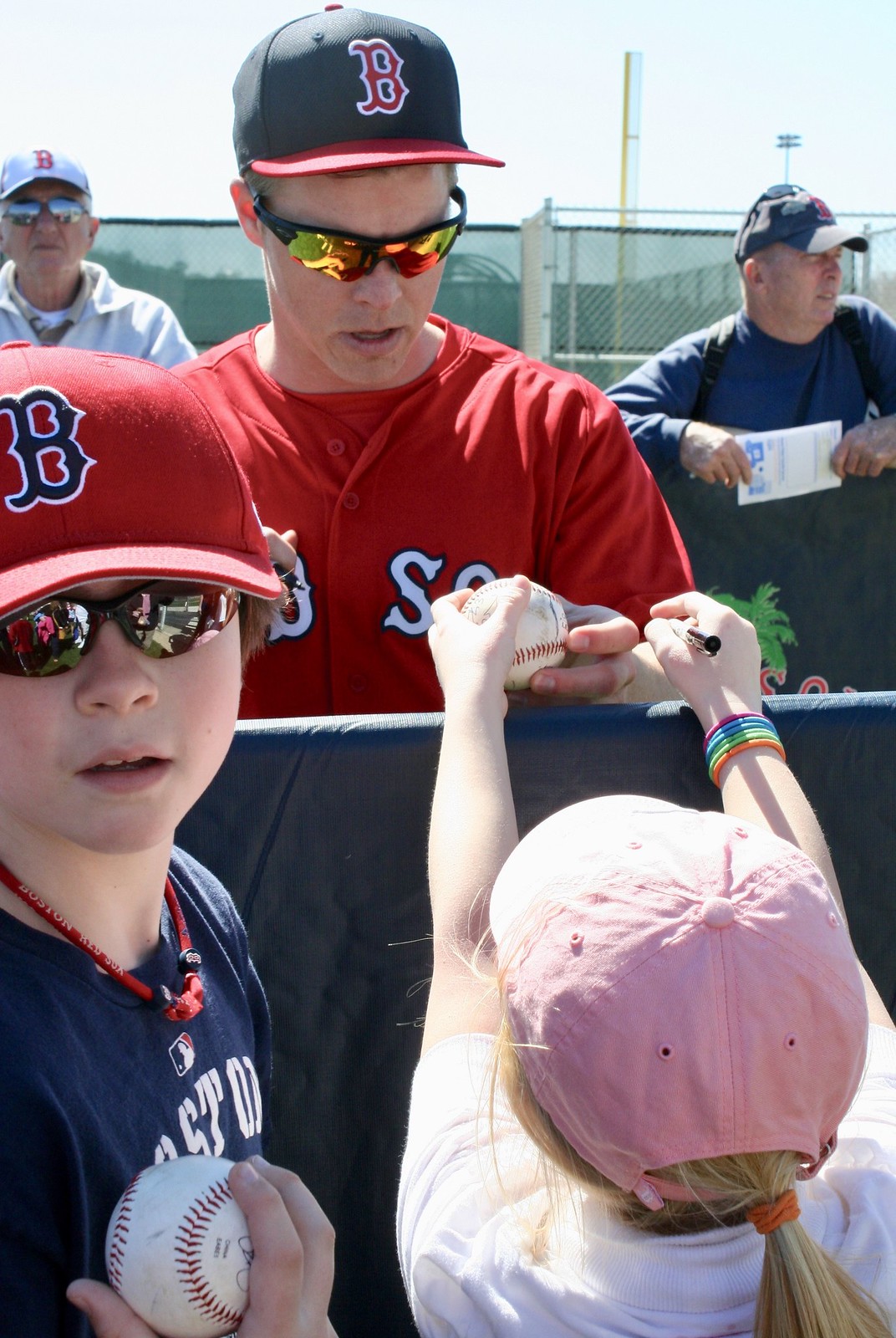 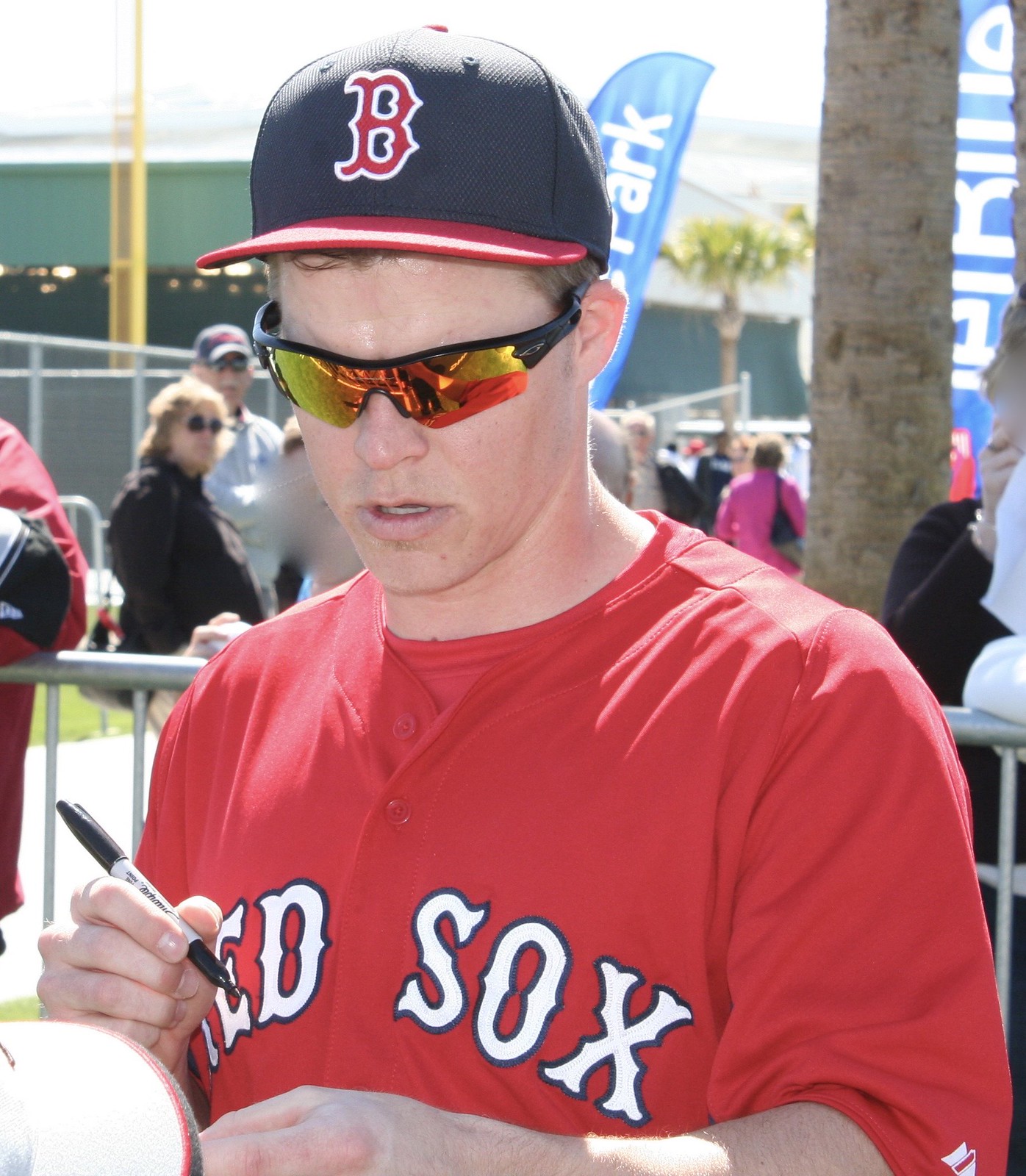 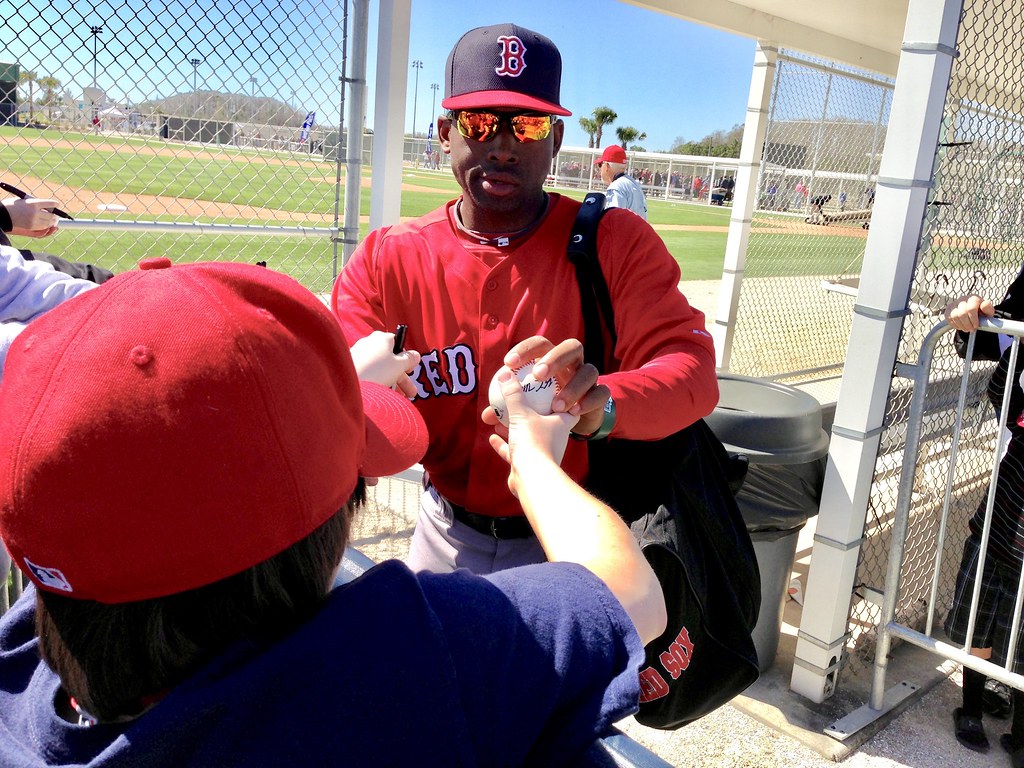 … and freshly minted Red Sox first baseman Mike Napoli, who was sporting the early stages of what would later become an epic playoff beard: 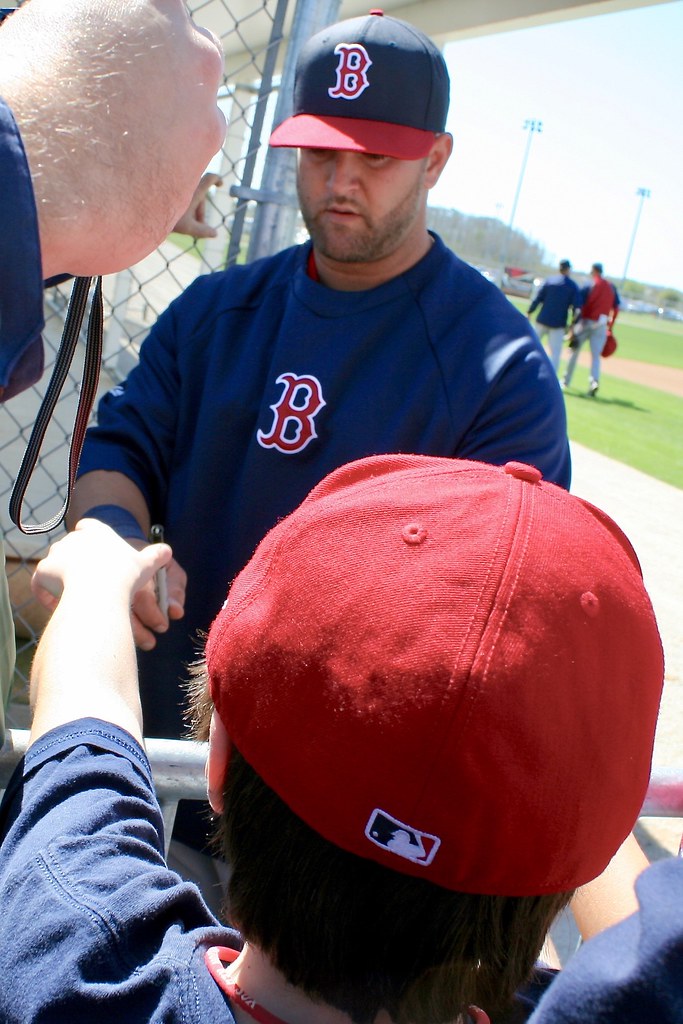 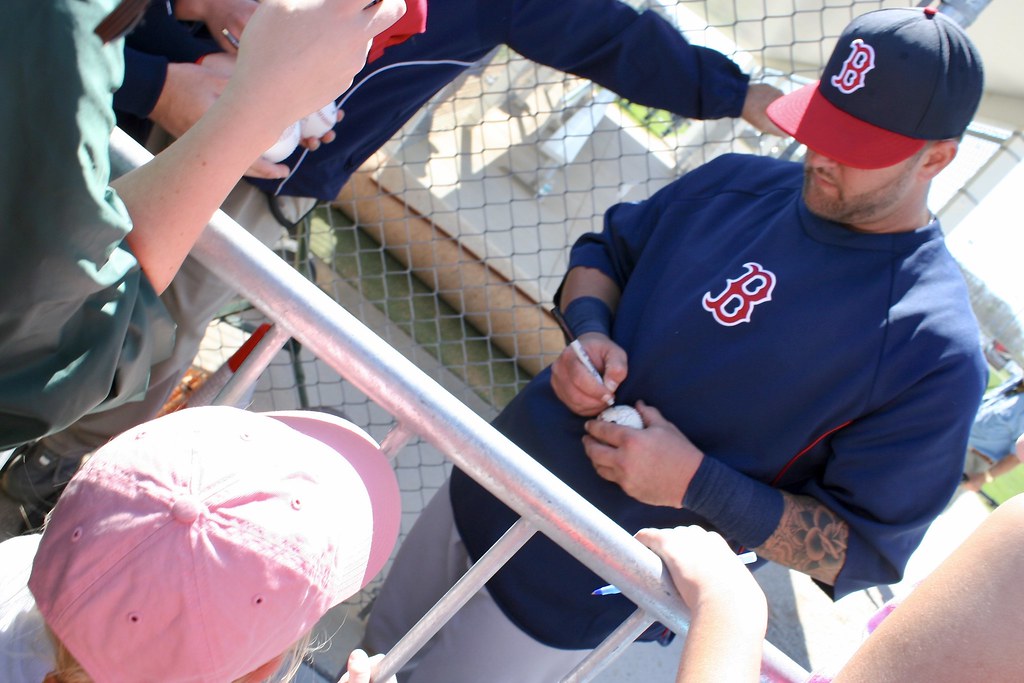 In addition to scoring autographs from those players and some other minor-leaguers, we also spotted manager John Farrell … 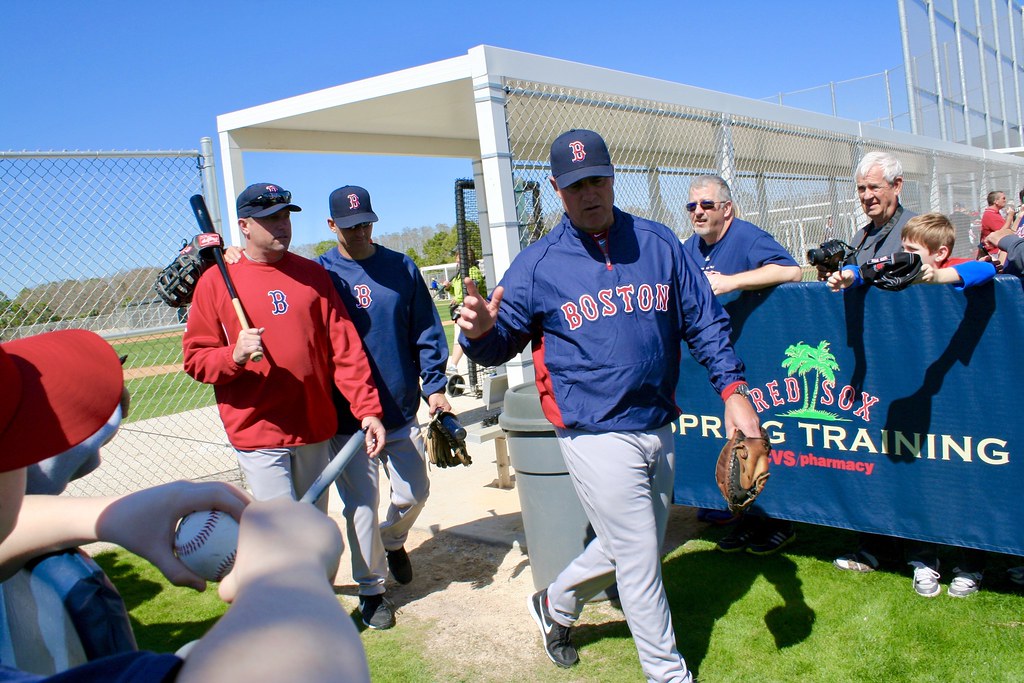 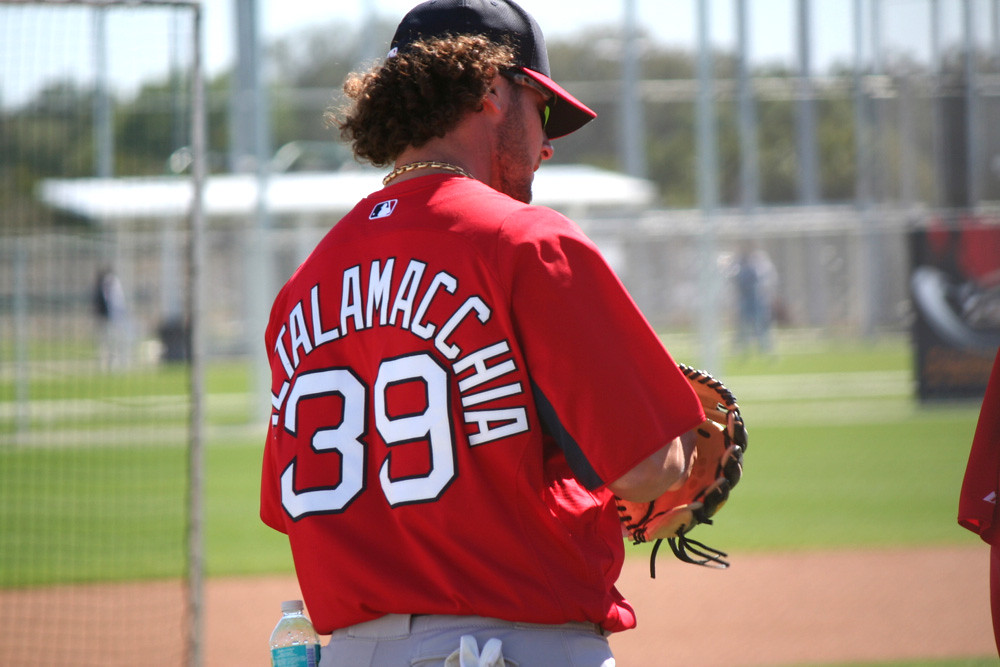 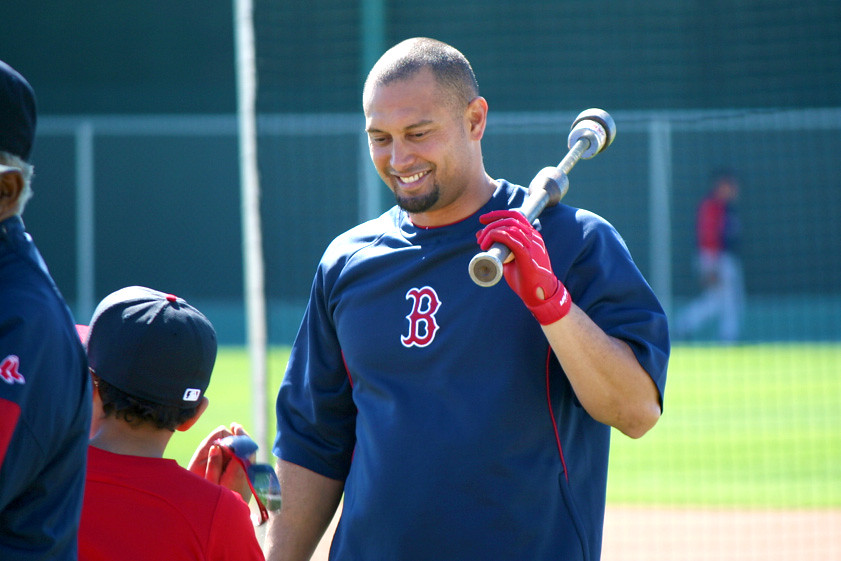 Hey, who’s that with Shane? 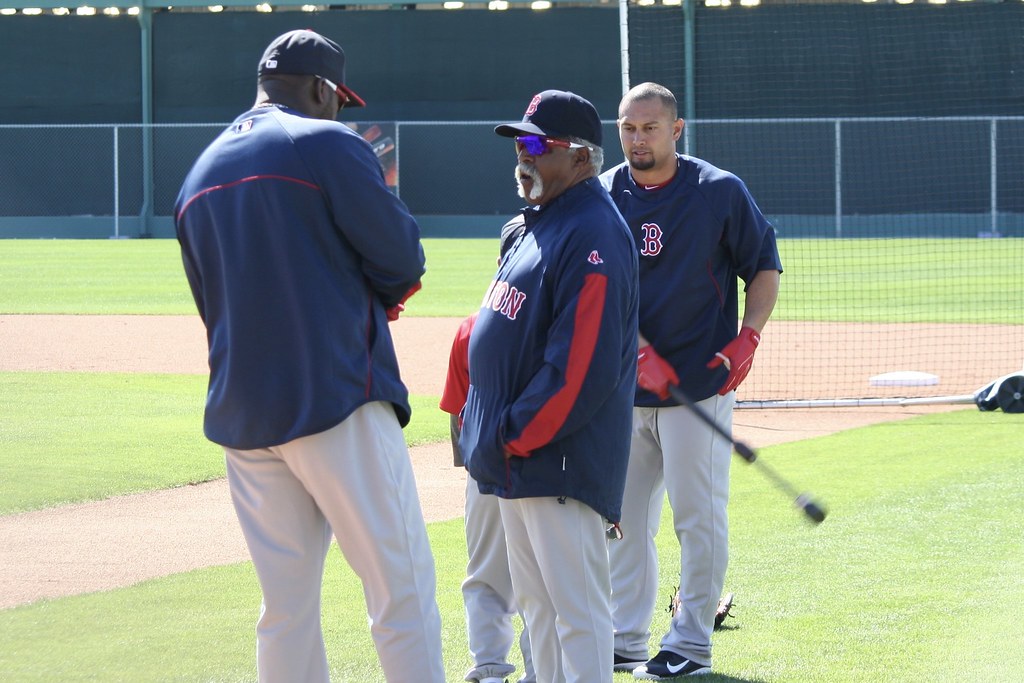 Why, it’s former Red Sox pitcher Luis Tiant and … wait a minute, is that …? It is! 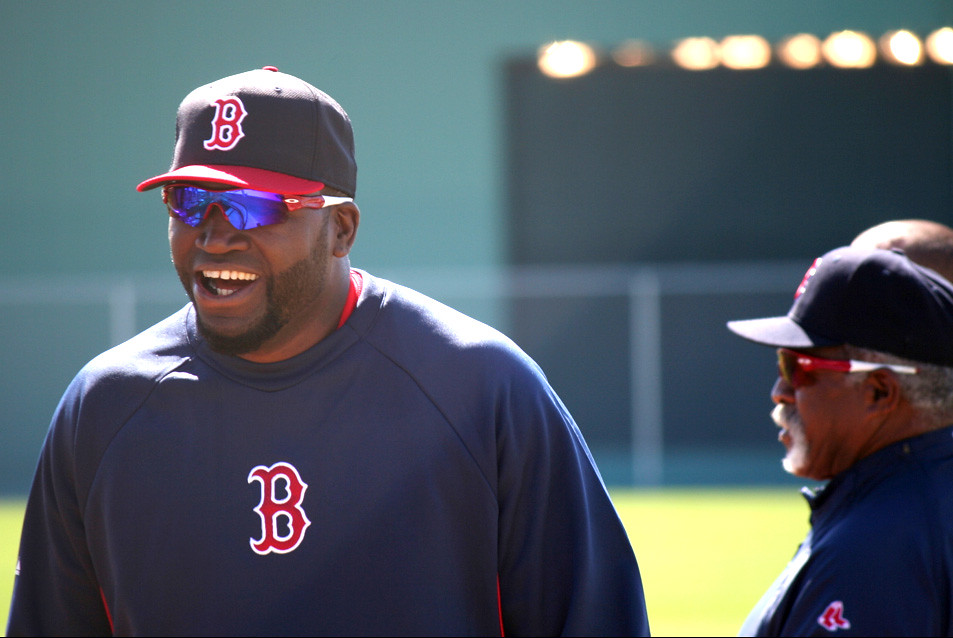 Yes, we hit the jackpot. Big Papi was there, taking batting practice and gearing up for a championship season that would end with him landing the World Series MVP trophy … an outcome I’m pretty sure was a direct result of the good luck we brought with us to Spring Training. You’re welcome!

As is often the case, David had his son with him … 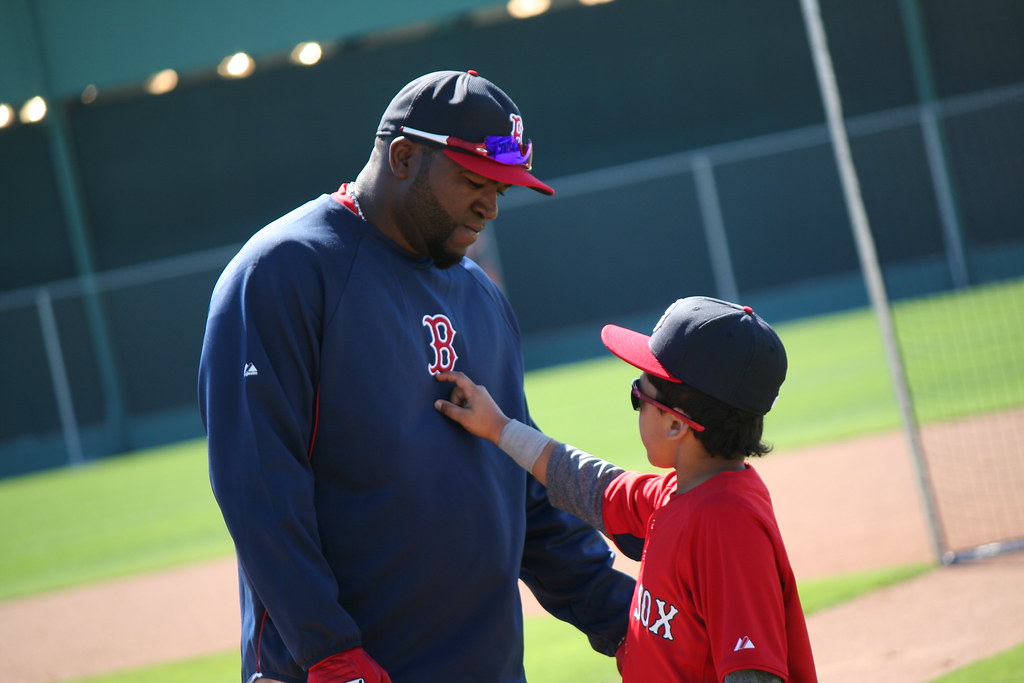 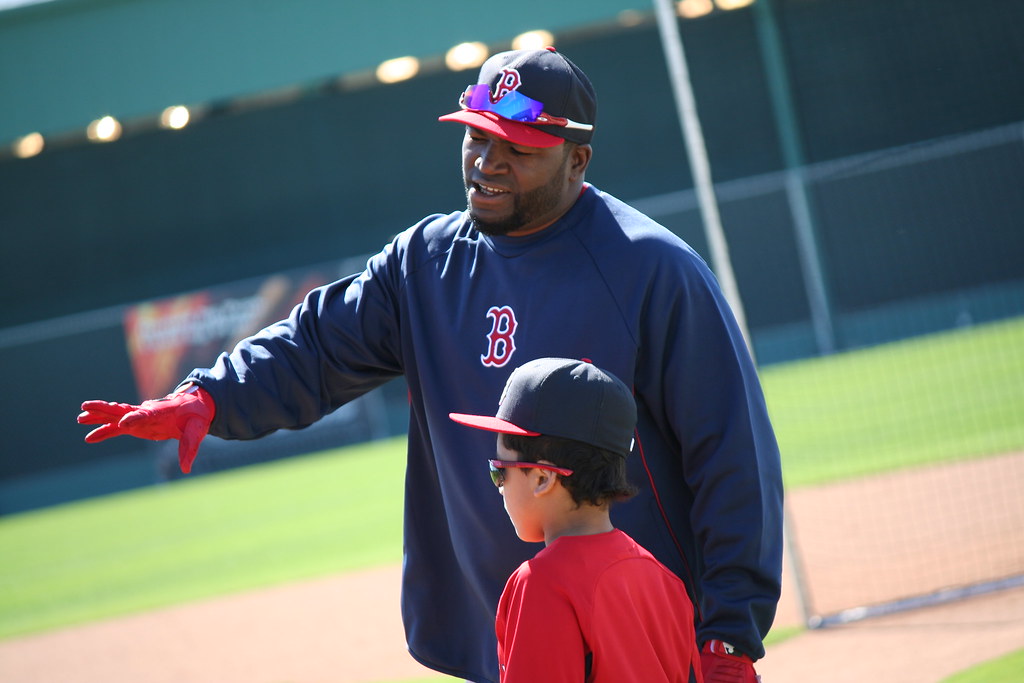 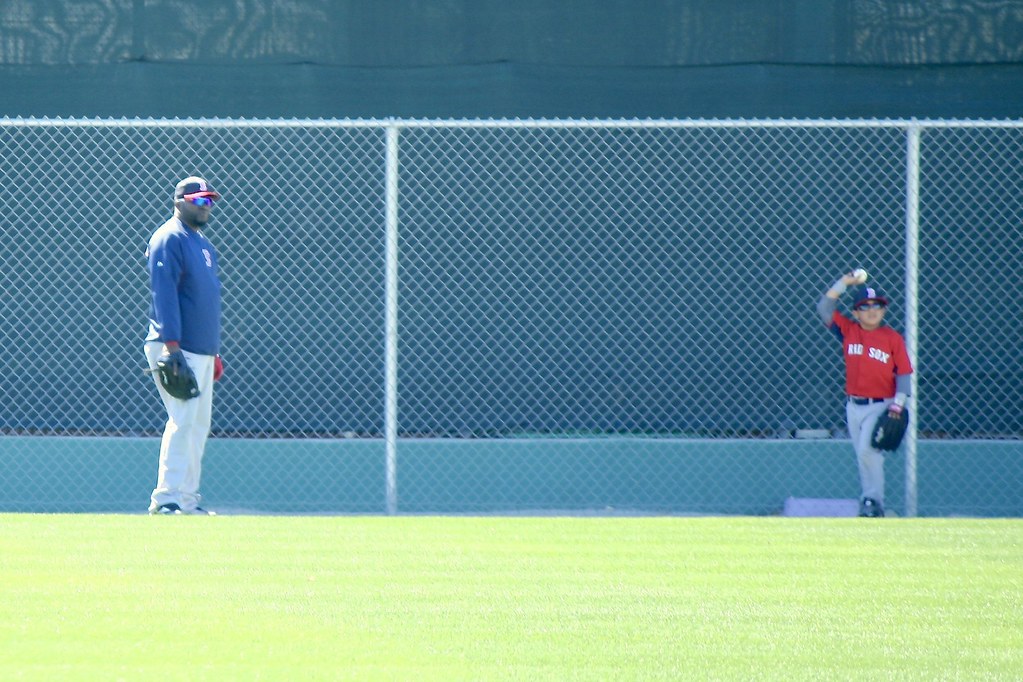 … and when the two decided to have a catch in the outfield, my daughter and I were inspired to follow suit: 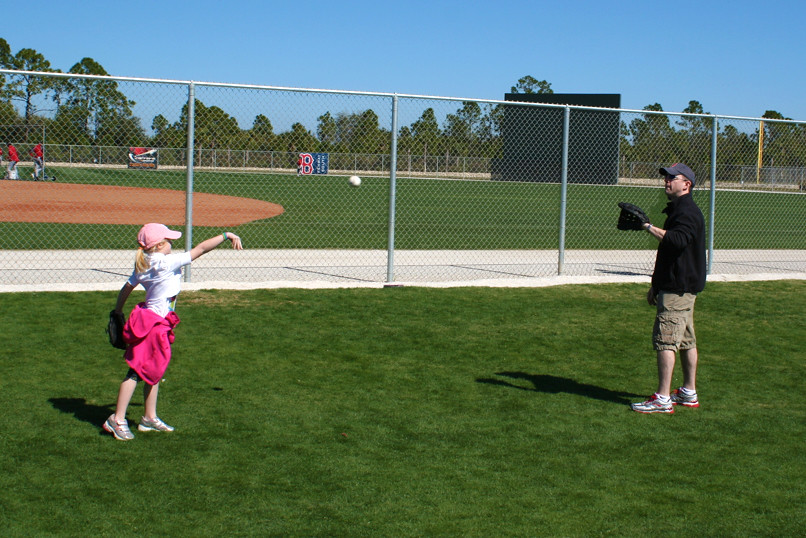 When the team wrapped up the day’s practice session at lunchtime, the kids were psyched to discover that Fenway South does, in fact, serve up Fenway Franks: 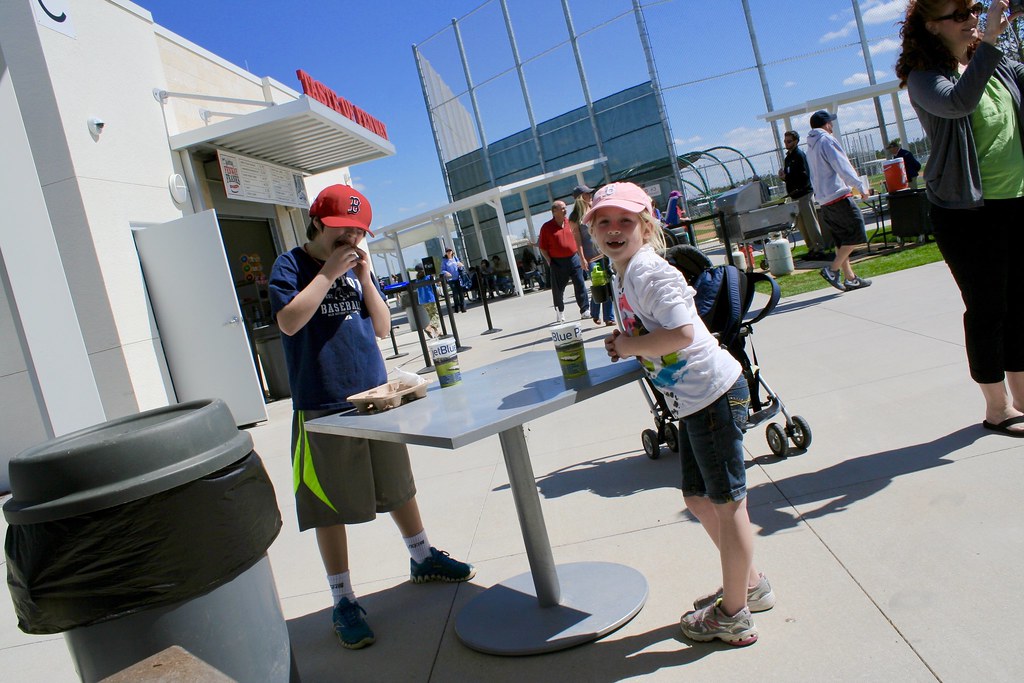 For a family of die-hard Red Sox fans who had no idea what to expect when we hopped in the car that morning for our first-ever visit to Red Sox Spring Training Camp, it was a day we’ll never forget … and if you’re a Sox fan who has considered a visit of your own, I can not recommend it highly enough — especially if you live someplace where the winter is a cold, dead, dreary landscape of yuck and blah. Nothing will help you shake off your seasonal affective disorder like being surrounded by sunshine, palm trees and Red Sox baseball. 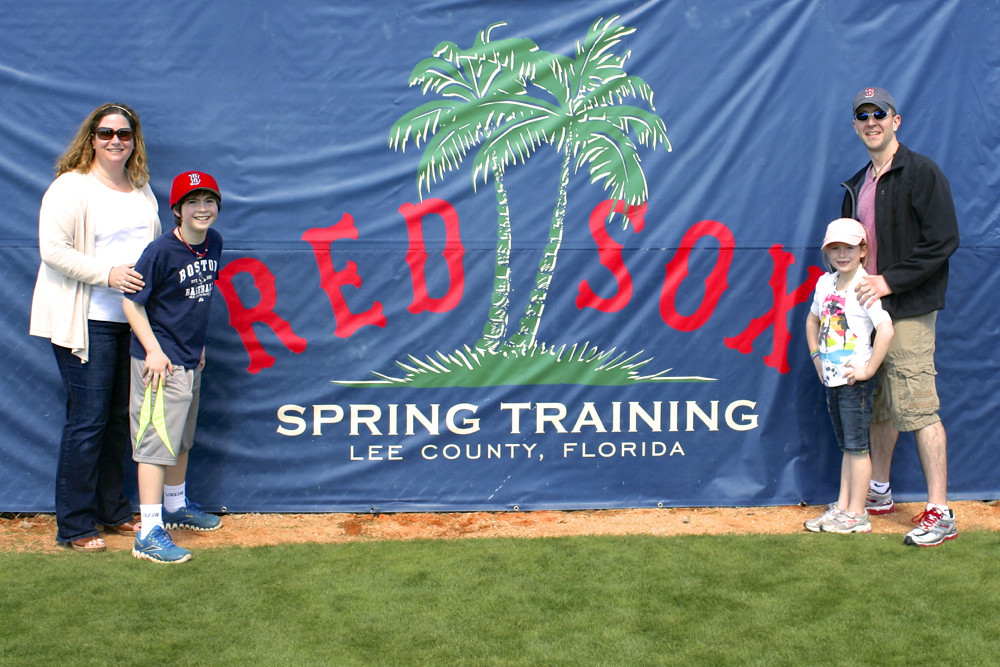 After having such an awesome experience, we all agreed that our first Spring Training visit would not be our last. Little did we know that our eventual return to JetBlue Park would make that first experience pale by comparison.