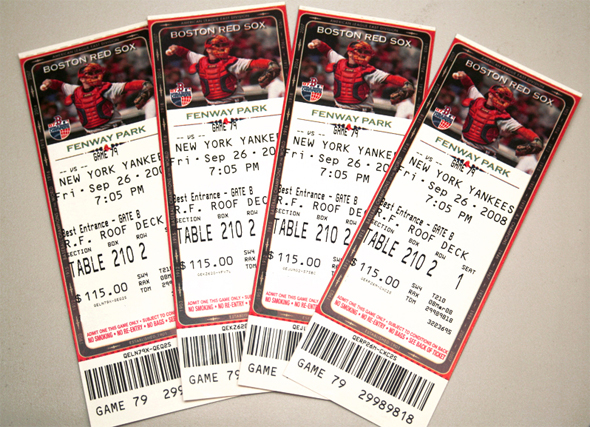 So, remember back in March when I said that I had successfully purchased four Right Field Roof Deck tickets for the Sept. 26 game against the Yankees? Seemed like quite a coup at the time. Hell, I figured there was even a chance that it could end up being the deciding game for the division title.

Fast forward to last night. Bad enough that the Yankees really do suck this year, but the weather … well, let us quote the Boston Globe’s Amalie Benjamin in an Extra Bases post published yesterday at 3:09 p.m.:

“We still haven’t heard anything about whether this game will be played, but it’s looking mighty grim around Fenway Park. It’s pouring, and the tarp remains on the field. The entire outfield is soggy or, as colleague Adam Kilgore just said, ‘It looks like a moat in front of the Green Monster.’

“That can’t be good for anyone’s health.

“So I wouldn’t make any long drives down to Fenway tonight, but there are also no promises yet that they won’t try to get this game in.”

In a subsequent post published at 7:07 p.m., Kilgore said:

“If they get in five innings tonight, I will eat my media guide. The tarp is being taken off the field, but it is a truly miserable night for baseball.”

So imagine my dismay, disappointment and disgust when the Sox and MLB decide to ass-ram this game through despite all reason, decency and common sense.

“When everyone bought those last-weekend-of-the-season Yankees-Red Sox tickets back in February, they probably were not hoping for Alfredo Aceves vs. David Pauley in the rain. But that is exactly what they are getting. First pitch was at 8:36.”

Four hours, 16 minutes and a second rain delay later, this sham of a game ended with the Red Sox taking a dive 19-8.

We felt pretty certain the game would be postponed till Sunday … and, regardless, we weren’t about to go stand around in the rain at Fenway all night while they delayed, stopped and restarted this game into the wee hours of the morn.

Who woulda thunk that the game we looked forward to and talked about non-stop for six months would end up turning into a bad memory of a missed game and a $500 Red Sox tab that we ate?

“My media guide has been devoured. Sprinkled on a little tarragon and grilled it over wood planks. Not bad.”

If @NESN’s objective was to make me a weepy mess, then mission accomplished.
#RIPRemDawg
#RedSox

The @Yankees playing the Evil Empire theme song while introducing the @RedSox represents a gold-medal level lack of self awareness.
#RedSox
#OpeningDay