I bet David Price is a great guy. In fact, I bet if I was sitting at the counter in a pizza joint having a slice, and he sat down nearby, and I asked him if he could please pass me the grated cheese, he’d be all, “Yeah, man, no problem. Here, have some grated cheese. And, hey, how ’bout some red-pepper flakes, too?” And I’d be like, “No, thanks” — because I’m a big wimp when it comes to hot, spicy foods — but, also, I’d be like, “but thanks for asking … and, hey, aren’t you Red Sox starter David Price? Wow, you seem like a great guy!”

Except, here’s the thing: I don’t need David Price to pass me the grated Parmesan or spontaneously offer me some red-pepper flakes; I need him to win a goddamn game in the postseason, especially when he’s pitching at Fenway goddamn Park against the New York goddamn Yankees.

So now the $217 million Game 2 starter for the 108-win Boston Red Sox has an almost incomprehensible postseason record of 0-9, and I am again reminded that not offering proven big-game pitcher Jon Lester what he was worth back in 2014 is the worst decision the Red Sox have made since Frazee sold Ruth.

Of course, Price isn’t the only one to blame for the 1-1 series split; the only thing that has dried up more thoroughly than the great mood we were all in after J.D. knocked a three-run dinger into the monster seats last Friday … is Boston’s offense.

Still, there were some glimmers of hope in Game 2, most notably from the bullpen. Both Joe Kelly and Ryan Brasier turned in quality relief appearances, with Brasier providing one of the night’s only moments worth remembering when he had some choice words for Gary Sanchez after the Yankees catcher stepped out of the batter’s box one time too many:

Ryan Brasier telling Gary Sanchez to “get in the f’ing box,” striking him out, and staring him down is everything I love about this sport pic.twitter.com/ErRzmtU83I

Now that was awesome, am I right? And it remained awesome until Sanchez returned to the plate in the seventh and made everyone forget all about it by launching a three-run missile off of Eduardo “Am I Supposed To Cover The Bag On A Grounder To First?” Rodriguez that still hasn’t landed.

So now the Sox have to win at least one at Yankee Stadium to keep this series alive, and I can only pray that Alex Cora — who, after Game 2, responded to a question about using Price in relief by saying “We’ll talk about it and see where we’re at” — has the good sense to lock his beleaguered No. 2 starter in the visitor’s clubhouse for Games 3 &4. Or maybe just send him home for whatever’s left of the 2018 campaign.

Because, while I’m sure David Price is a great guy … I’m equally sure that never, ever again do I want to see him pitch against the Yankees in the postseason. 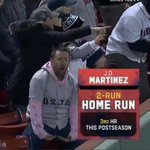