That horrified scream you heard when our ace gave up his third home run of the inning last night? Yeah, that was me.

Of course, truth be told, I’m 50% responsible for last night’s loss. You see, just before the game, I published a post in which I heralded Porcello as the only one of our starters in whom I have confidence this postseason … and then he laid a pterodactyl-sized egg on the mound. Coincidence? I think not.

No, much like one should never say out loud that the pitcher currently is throwing a no-hitter, so too should one never write on one’s Red Sox blog a declaration of “no confidence” in all but one of our postseason starters.

I jinxed Rick Porcello. It was me. I blew it. My bad. Sorry, everybody.

As for assigning the other half of the blame for last night’s loss … well, I think we can all agree that the culprit was obvious:

Also? No one wants to see the Red Sox wearing their “Alternate” red jerseys tonight. Oops. I take that back. It turns out we have statistical evidence that, during the 2013 season, the Sox went 3-3 in those hideous blue jerseys … but 5-1 in those slightly less hideous red jerseys. So if they trot those out tonight, I’ll tolerate it.

They went 0-for-11 last night. That just ain’t gonna cut it, people.

And now? Now we must all place our trust in the shaky hands of David “I have a 0-7 record as a postseason starter” Price.

Everybody thought Porcello was a lock to win last night … and nobody wanted to bank on Price being the stopper today. But guess what? Baseball doesn’t care what you think. Baseball laughs at what you think and flips you the bird while the Indians hit back-to-back dingers off of your presumptive Cy Young award-winner. So there.

The upside of baseball’s twisted sense of humor? Maybe, just maybe, David Price goes out there and spins a gem in Game 2.

But I’m not going to suggest that such a thing is actually possible … because we’ve all seen what happens when I make postseason-pitching predictions. 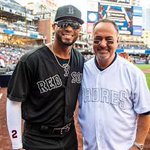 .@Jared_Carrabis If I have to see this, then so do you.

- A Sox fan in Philly

When Xander Bogaerts signed his most recent contract, Dave Dombrowski called him “one of the top players in the game of baseball.”

That holds true now, too. https://t.co/QnjPxvzi3L